“I came in like a fresh friend,” Joan Bauer says of getting Philip Snider to open up during their chats over coffee at Burger King.

An Ohio policewoman who stopped working undercover decades ago agreed to take on one last case — and she helped put a killer behind bars.

In 2018, the Hartville chief of police described a possible murder to Joan Bauer, who years earlier had traded working as a detective for a role training officers. “I thought it was time to go undercover one more time, and that’s how it all started,” Bauer told Fox News of transforming into “Missy.”

In January that year, Roberta Snider, 70, vanished, and the woman’s husband of 50 years, Philip Snider, 74, kept changing his story about what happened to her. In one version of events, Snider said his wife died while they were driving from their home in Ohio to Graceland in Memphis, Tennessee. Detectives could not verify the account, or any other of his explanations about her whereabouts.

Despite intense questioning, detectives were unable to get Snider to crack, and Bauer stepped in to try to help.

“I watched him for a good week prior,” Bauer recalled of surreptitiously getting to know Snider, who was a regular at Burger King in the mornings.

Though the suspected murderer wasn’t friendly or the most talkative, Bauer said she too became a regular at the fast-food restaurant and often chatted with him as well as other customers as she slowly worked to gain his confidence over the following weeks.

“I came in like a fresh friend,” she told Fox. “I knew it was important for me to create somebody that not only he could be friendly with, but someone he could trust — somebody who wouldn’t judge him.”

Bauer’s goal was to be approachable, but not flirty. “I wore sweatshirts. I did not wear makeup. Sometimes I would literally just roll out of bed and not brush my hair,” she said. “I made sure he knew there was no room for a romantic chance, even though I don’t think he would have minded that."

After they grew closer, Bauer finally asked Snider to open up about his wife’s death and tell her the truth. Their taped conversations led to a shocking revelation. 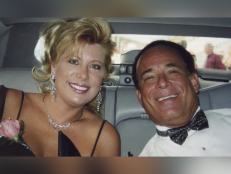 Dr. James Kauffman offered a motorcycle gang leader $50,000 and unlimited Oxycontin prescriptions to murder his wife, April, who was suing him for divorce.