Looking At Luka Magnotta — His Online Life & His Hunger For Fame

Magnotta threatened that his next online video would involve “some humans.” He also wrote, “Once you kill and taste blood it's impossible to stop.”

Magnotta created dozens of fan and tribute pages for himself, on sites such as YouTube, MySpace, Facebook, and Flickr, as if they were done by other people. He left an extensive digital footprint behind, much of which is still viewable online. 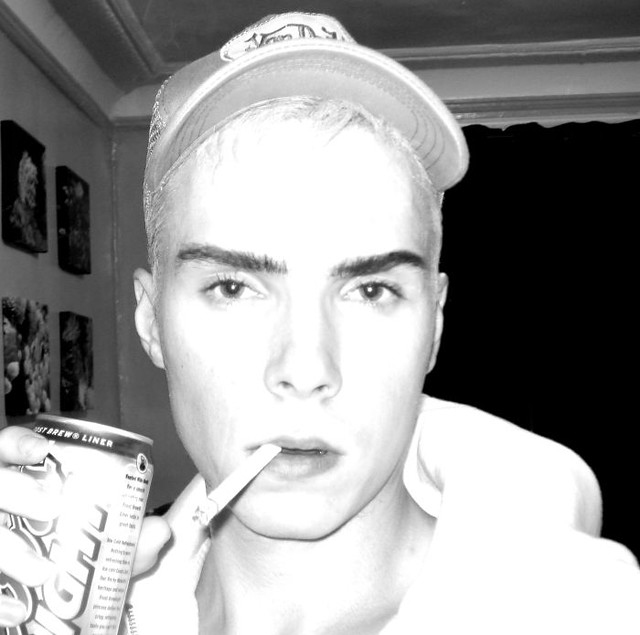 He was able to skillfully manipulate his reality to give the impression of popularity, fame, love, and wealth. Underneath it all, he was apparently struggling, with mental illness and his crushing inability to realize his dreams.

In 2007, Magnotta appeared on a show called Naked News discussing his career as a stripper and an escort. At the time, he was going by “Jimmy,” in tribute to his idol James Dean.

In 2008, he tried to get cast on a show called Plastic Makes Perfect, hoping to score some free plastic surgery, in addition to becoming more well known. It's chilling to listen to him describe the more gruesome aspects to surgery.

He also auditioned to be in a documentary about bisexuality in 2010.

After not getting any of those jobs, Magnotta’s desperation for fame evidently boiled over in intensity. Later that year, it seems he decided that infamy was as good as fame, so he tried to get the world’s attention by uploading videos to the internet in which it appeared that he killed kittens in different ways. Some he allegedly suffocated in a vacuum bag, another he fed to a python. One of these videos was titled 1 boy, 2 kittens.

These clips did finally get Magnotta noticed. Various animal-rights groups targeted him, trying to find out his identity. Online sleuths worked to track him down, even turning his name into the authorities. Despite their efforts, the police never seemed to take these complaints seriously, even after being warned that many serial murderers initially act out by torturing and killing animals.

Another scheme Magnotta devised to call attention to himself was to start rumors that he was dating infamous Canadian killer Karla Homolka. One example is a profile he made on the Russian equivalent of Facebook, on which Magnotta can be seen engaging in flirty interactions with a profile called “Karla Magnotta.” 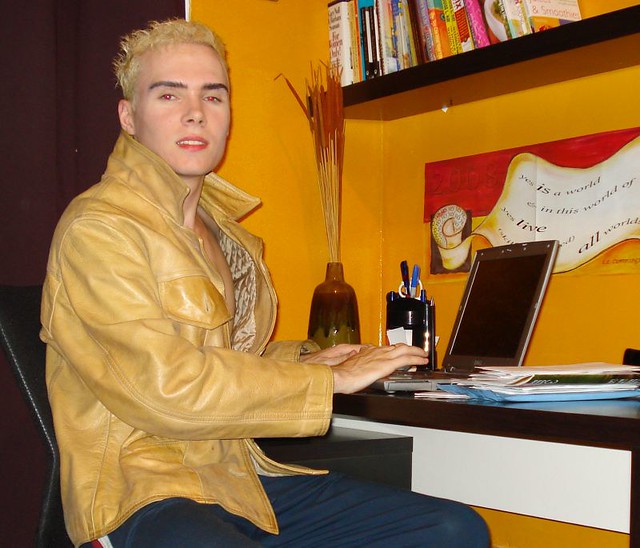 At the same time that accusations cropped up online linking Magnotta to the animal murders, the rumors about Homolka — planted by Luka himself — also grabbed attention. Amid the hubbub, Magnotta would seek out journalists and other media outlets to make a big deal about denying the accusations.

Around this same time, Magnotta reportedly penned a letter to another journalist, referring to the cat killings. Therein, the writer threatened that his next online video would involve “some humans.” He also wrote, “Once you kill and taste blood it’s impossible to stop.”

Authorities believe that Magnotta’s strategy with the kitten-killing videos was to try to generate advance buzz, using dozens of fake online identities, making reference to the videos before they were actually available. On March 3, 2012, a post referring to “necrophiliac serial killer Luka Magnotta” showed up on Blogspot.

Over the next couple of months, posts referring to Magnotta or the title of his new video, 1 Lunatic, 1 Icepick, showed up in various online forums. But it wasn’t until May 25, 2012, that the approximately 10-minute-long video actually surfaced, on BestGore.com and other real gore websites.

In 1 Lunatic, 1 Icepick, which Magnotta shot, edited, and, again, scored with “True Faith” by New Order, Magnotta is seen with a victim, a man named Lin Jun. While Jun is bound, it appears that he gets stabbed dozens of times with an icepick, after which he’s decapitated, dismembered, cannibalized, and even fed to a dog.

Viewers initially believed that Magnotta’s video involved a single victim. During legal proceedings the following year, however, experts retrieved three hours of unedited footage from the memory card of Magnotta’s digital camera. It turned out that the first live, sedated man who appears in 1 Lunatic, 1 Icepick was not, in fact, Jun.

The individual who Magnotta threatens with an electric saw was actually an unidentified Colombian man who Luka had reportedly picked up for sex several days prior. That person managed to escape with his life.

After the saw footage, the video cuts to the dead body of Jun. The corpse gets stabbed, sliced, and dismembered. Magnotta also uses a knife and fork to very awkwardly cut bite-size chunks of his victim’s buttocks, which he presumably ate.

This video is real. It’s an authentic document of murder, cannibalism, and necrophilia, that was staged, shot, edited, and uploaded by the murderer himself. He then scored it to come off in the manner of an upbeat music video.

While 1 Lunatic, 1 Icepick is difficult to find online now, for six days it circulated on the internet, hosted by several websites and no doubt downloaded and copied countless times. It also spawned a trend of ironic reaction videos, in which viewers were filmed while they viewed the spectacle and reacted to it.

Over the next 24 hours, Magnotta was filmed leaving alone, sometimes wearing Jun’s yellow tee and other times his cap. He disposes of garbage 16 times total, and, most chillingly, he returns at one point with a large, empty suitcase. Later, Magnotta makes a couple of trips out of the apartment carrying bulky bags.

Of course, we know now that parts of Jun’s body and a dead dog were left in the garbage in that suitcase. Magnotta also carried other parts out in packages that he mailed to an array of different governmental offices. Throughout his various trips in and out of the building, Magnotta often stops to check his hair in the lobby mirror.

CCTV cameras also captured Magnotta at a local postal outlet, from where he sent off Jun’s body parts. At some point during all of these efforts, he managed to both order a pizza and upload 1 Lunatic, 1 Icepick to the web. Magnotta unleashed his atrocities on the internet in his last, desperate gambit to be famous.

Over the next few days, online viewers debated whether the snuff film was real, or maybe just composed of convincing special effects. At least one attempt was made to report it to authorities, but the claim was dismissed.

On May 29, 2012, the aforementioned political offices received the packages of Jun’s body parts that Magnotta had mailed to them. Investigators discovered the suitcase containing other parts in the garbage outside of Magnotta’s apartment. They also turned up further evidence linking Magnotta to the murder.

By then, Magnotta had fled from his native Canada, and Interpol enacted an international manhunt. Magnotta first stopped in Paris, traveling under the moniker “Kirk Trammel,” Trammel being the last name of Basic Instinct‘s ice-pick wielding killer. After a few days of partying in Paris, he took a bus to Berlin.

Fittingly, the attention-seeking Magnotta was finally captured on June 4, 2012, in Germany, in an internet café. He was there looking up nude photos of himself and articles about his own crime.

On December 23, 2014, Luka Magnotta, 29, was found guilty of five charges including first-degree murder and “committing indignities to a body.”

Dr. Joel Watts is a forensic psychiatrist who treated Magnotta and performed the suspect’s official psychiatric evaluation for his 12-week trial. Watts had to observe Magnotta’s symptoms and determine whether they were legitimate or if there was a chance he was faking them in order to be determined to be mentally ill. Somewhat amusingly, Watts writes:

“I was surprised by how dramatically unwell Magnotta appeared. I thought that perhaps he was skillfully putting on a show. Nagging at the back of my mind, however, was the fact that he would have had to be an exceedingly good actor to pull off such a convincing presentation of psychosis. In retrospect, judging by his lack of success in the acting profession to date, this is unlikely.”

Watts also points out that the killer had a long history of being treated for schizophrenia, and he is of the opinion that during the time of the murder, Magnotta was “quite ill.” The doctor has further attested that Magnotta suffers from histrionic and borderline personality traits. Watts does, in fact, believe Magnotta was psychotic when he did the killing.

Despite such medical testimony, the court determined that Magnotta didn’t qualify as NCR (Not Criminally Responsible). He was found guilty of all charges.

At present, Luka Magnotta is serving a life sentence, with the possibility of parole after 25 years.

The Necrophile Morgue Worker & The Corpse Rape That Exposed Him

The Murderous Pastor Who Craved Sex With The Dead

After killing Conway's mother, John D. White dressed the three-year-old in his Halloween costume and dropped the oblivious boy off to his father in a grocery store parking lot.

Man Killed Toddler With Ant Poison, Raped Her Corpse — Because She Irritated Him

Jeffrey Dahmer's Murderer Explains Why He Killed the 'Milwaukee Cannibal'

Christopher Scarver, who is serving time for killing his boss during a robbery, insists that Jeffrey Dahmer did not feel any remorse for his crimes.

In a gubernatorial campaign video, "Joe Exotic" says, "We all have to get along. Love and respect each other."